YORK, Pa. – York College of Pennsylvania’s Theatre Program will present a family-friendly production of A Christmas Carol for the holiday season at 10 a.m., Dec. 3, in the Waldner Performing Arts Center. This performance is free for the community with general admission seating. No reservations are required. For more information, call the box office at 717-600-3868.

Audiences will recognize Spencer as Tim in October’s production of Because They Have No Words and in the dual roles of Duncan and MacDuff in the spring 2021 streaming version of Macbeth. This production of A Christmas Carol will be the first holiday production that the York College Theatre Program has offered since 2019. 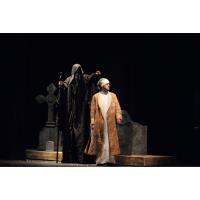