REYES, RIVERA, AND MESA NAMED REVOLUTION PLAYERS OF THE YEAR

REYES, RIVERA, AND MESA NAMED
REVOLUTION PLAYERS OF THE YEAR

Trio Takes Top Honors for Performances On and Off the Field

Reyes was a consistent, steady contributor for the Revs, day in and day out, while manning one of the most demanding positions on the diamond. His rock-solid defense at shortstop helped the Revs become one of the league’s best defensive teams. His 115 games played ranks second on the team. At the plate, Reyes batted .271 and ranked 8th in the league with 133 hits and 8th in the league with 52 extra-base hits. He blasted 10 home runs, drove in 66 runs, and set a new Revs single-season record with a league-leading 41 doubles.

Rivera finished his second season in York leading all active pitchers on the staff with 8 wins and 18 starts. He worked 110 innings on the season and allowed 14 fewer hits than innings, ranking 2nd in the league with a .235 opponents’ average. He also eclipsed the 100-strikeout mark for the second straight year, tied for 9th in the league with 102 strikeouts on the season. He finished second on the team in wins, innings, and strikeouts, and was the only pitcher to place in the top two in all three categories.

Mesa’s impact on the field during his four seasons in York has been second to none. He capped off another outstanding season with a .272 average, 24 doubles, 16 home runs, and 77 RBI. This season, he set the Revs’ all-time record for RBI, moved into second in hits and home runs, and defensively set the all-time record for outfield assists. But his impact off the field was just as significant. The Revs’ captain was one of the first on the field each day and one of the last to leave each night, stopping to sign autographs and bond with a fanbase that has adopted him as a true fan favorite. Beloved by his fans, his teammates, and opponents, Mesa played the game with a constant, huge smile, and no one brought more smiles to the faces of others than Mesa. 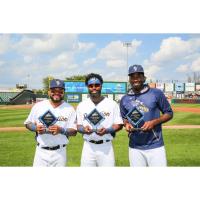