York, PA – For 2nd Quarter 2022, First Capital Federal Credit Union raised $2,050 for Big Brothers Big Sisters of York and Adams Counties. A portion of the money was raised through soft pretzel sales and jeans days as part of our FirstCap Gives Back Program.

First Capital was also a proud sponsor of two fundraising initiatives hosted by Big Brothers Big Sisters of York and Adams Counties. The first was Bowl For Kids’ Sake held earlier this year and the second was Golf Fore Kids’ Sake held at Briarwood Golf Course on June 9, 2022.

“Big Brothers Big Sisters is an organization close to our hearts,” said Tara Houser, VP of Marketing & Business Development. “All children should have a role model they can look up to and learn from.”
Every quarter, a different organization is selected as our FirstCap Gives Back partner. For 3rd Quarter, First Capital will be raising money for Autism York. 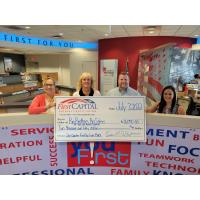