First Capital celebrated this day in many ways, with the goal of bringing together our employees, members, and local community. Employees shared why they love their credit union, which included reasons such as our members, great rates and rewards, and our community engagement. Members also shared why they love their credit union, citing reasons like great customer service, friendly staff, and awesome rates. Three lucky members won a $25 VISA Gift Card, just for participating!

Lastly, First Capital, in partnership with the Illinois Credit Union League, received $1,000 to donate to a local non-profit. Participating non-profits, employees, members, and the local community then voted for who they wanted to win the $1,000 donation. The non-profit with the most votes and winner of $1,000 was the Margaret E. Moul Home. Congratulations! Overall, the day was a success for everyone involved!

“Our members and staff did a fantastic job spreading the word and sharing #ILOVEMYCREDITUNION on social media,” said Tara Houser, VP of Marketing & Business Development. “It was really great to seeing our community and the credit union industry as a whole come together and spotlight all the reasons why people love their credit unions.” 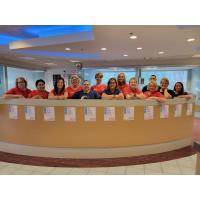