(September 14, 2022, York, Pa.) — At nearly every York Revolution home game for the past 15 seasons, Cannonball Charlie has saluted fans before firing the night’s first cannon blast. This Saturday, Revolution fans will salute their long-serving cannoneer as he serves in his final game at PeoplesBank Park.

Known outside of the ballpark as Jason Kreiger of York, Charlie announced in June that he would retire after the 2022 season. As the team’s official cannon operator since nearly the creation of the Revolution, he has fired his introductory cannon blast more than 1,000 times. When you add in the more important blasts for home runs and victories (the Revs’ win tally now exceeds 600 games), the boom count jumps into the thousands.

Virtually synonymous with the team, Charlie has earned a faithful fan base over the years and been featured in everything from coloring books to bobbleheads. Last weekend, the team gave out T-shirts featuring the beloved figure to fans, many of whom sped to Cannonball’s Corner, game time home of the cannoneer, for an autograph on the commemorative piece of Revs gear.

“Cannonball Charlie has been an integral part of the York Revolution game experience for countless fans almost since day one,” noted team president Eric Menzer. “The cannon will remain, and we’ll do our best to find a worthy successor or successors to operate it going forward, but we’ll never be able to replace Cannonball Charlie and what he has meant to this community.”

Menzer added that, in addition to his appearances at more than 1,000 Revolution home games, Cannonball Charlie has been a volunteer team ambassador and supported countless causes in the York community. From reading to kids in libraries across the county to firing the cannon to signal the start of everything from 5Ks to charity fundraisers, Charlie’s contributions to his town “will echo for many more years,” Menzer said.

The team plans to honor Charlie early in Saturday’s game against the High Point Rockers. The Revs will invite all fans in attendance to return the cannoneer’s signature salute to him at the end of the first inning. A more permanent tribute, Menzer said, will be a topic for discussion and planning in the offseason.

While the Revs will wrap their season on Sunday, Saturday will mark Charlie’s final appearance, as he and the team silence the cannon on Sundays in deference to the canine ears in the ballpark for each Sunday’s Bark in the Park.

Tickets for Cannonball Charlie’s final game are available at www.yorkrevolution.com, by calling (717) 801-HITS, or in the Shipley Energy Ticket Office at PeoplesBank Park. 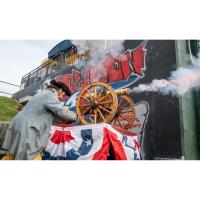