Atlantic League Names Pitcher, Player of the Month for June

Atlantic League Names Pitcher, Player of the Month for June

Franco, 30, posted a .372 batting average in 24 games during June, driving in a league-best 29 runs and hitting nine home runs. The Bani, Dominican Republic native added 11 doubles and led the Atlantic League with 20 extra base hits and 73 total bases during the month. York went 15-10 during the month and jumped from fourth to third in the North Division, gaining five games on .500. On the year, Franco is hitting .316, is tied for second in the Atlantic League with 23 homers and leads all ALPB hitters with 72 RBI.

Mills, a 26-year-old lefthander from Marietta, Ga., posted a 4-0 record in June with a 1.53 ERA while helping Southern Maryland win the Atlantic League’s first half pennant in the North Division.  He posted wins vs. Lancaster, Charleston, Staten Island and York, striking out 31 hitters in 35.1 innings, allowing just 21 hits, seven runs, and 12 walks. Mills gave up four or fewer hits in four of his five starts in June. On the season, Mills is 8-1 with a 3.12 ERA in 11 starts and is one of only two pitchers in the Atlantic League to have reached eight wins. His 3.12 ERA is the second-best in the ALPB this season.

“The success that Carlos and McKenzie had was directly reflected in their teams’ results in June,” said League President Rick White. “Carlos was a key driver in helping York move up in the North Division standings and McKenzie played a major role in helping Southern Maryland win the first half pennant in the North.”

About the Atlantic League of Professional Baseball (ALPB) 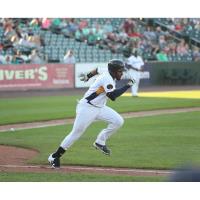